There are several key data types, each of which you should report in a different way:

How to Present Them

Statistical analysis is going through the greatest explosion of methodologies in its history. However, some conventions do exist, as discussed here.

Discuss scalar variables numerically using the mean, median, mode, and standard deviation. You can throw in the variance for good measure, but since the standard deviation is the square root of the variance, you don’t need to. Graph a scalar variable using a histogram or ridgeline plot. For instance, you might say, “Mean salary in a company in Great Britain was £30,950. The median salary was £18,888 with modes at £15,350 and £70,100. The standard deviation is wide at £14,113.23.” Having all the numbers can tell you a lot about how the data are distributed.

See examples of histograms below. One is of magnitudes for earthquakes that occured near Fiji since 1964. Magnitude is on the x axis and frequency, or number of earthquakes, is on the y axis. The left-most bar shows that approximately 190 earthquakes were of magnitude 4.0. Further along, you can see that the stronger the magnitude, the fewer the quakes at that magnitude.

The second example is a histogram of how much additional sleep students got when they took an experimental drug. There were only 20 students in the data set, which may be why the extra sleep seems not to have been normally distributed. That may be the reason; there are other possibilities. 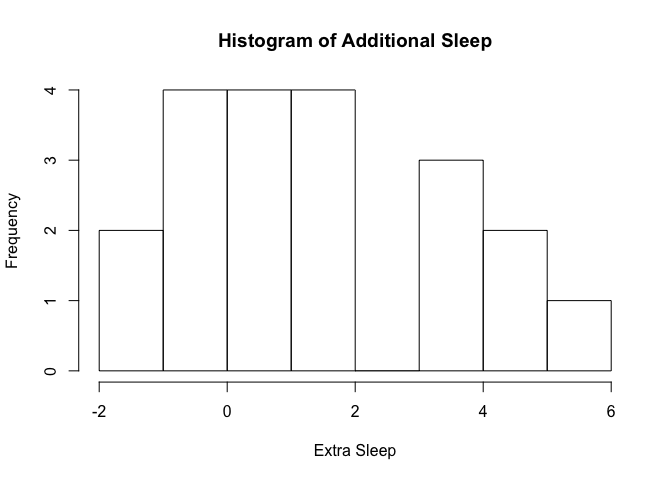 Better than histograms, in some people’s opinions (including mine) are density distribution plots, which are variously known as ridgeline plots or joyplots (although, due to copyright issues, we are not supposed to use “joyplots” any more). 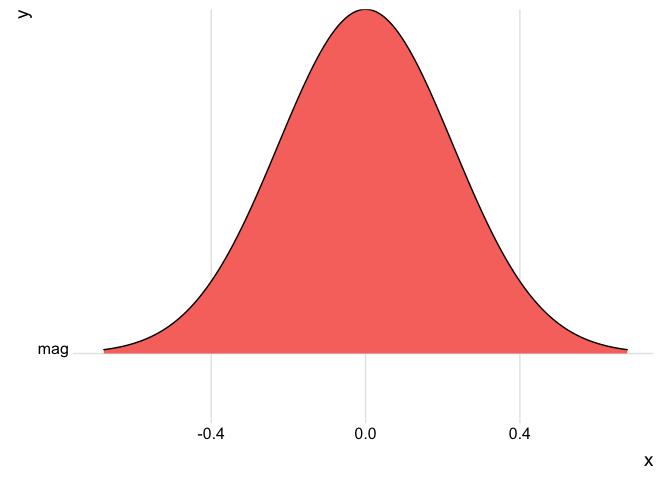 The distribution of quake magnitudes appears to be normal in a density plot. That’s because R standardizes the data before displaying it, and applies a smoothing algorithm to convey the basic shape of the distribution without getting caught up in subtleties.

Ridgeline plots can be a lot of fun. Check out this example: 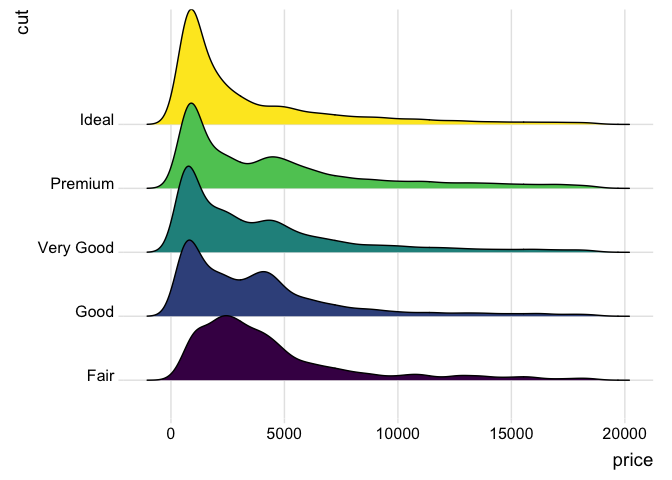 …but we get ahead of ourselves, as this second example shows the relationship between a scalar variable (price) and a categorical variable (cut).

Whether you use a histogram to see subtle differences in frequencies of each value or a ridgeline plot to get the basic idea of how the data look when they’re standardized is up to you. In some contexts you will want one method, in others, the other.

Discuss categorical variables by stating the number of incidents of each category (e.g., 6 children ate apple sauce, 2 ate pear sauce, and 12 ate strawberry compote). The American Psychological Association editors in their handbook (affectionately referred to as “APA 6th”) recommend including the percentages, calculated as in this code chunk.

Using R Markdown’s inline expression syntax, you can drop values straight into your text, like this:

Just don’t give percentages without also giving the raw number of data points you have. It matters rather a lot if someone tells you they have 75% of a thing and they had 10,000 data points, but it would be cheating to imply that our 75% (which represents 3 data points out of 4) is equally meaningful.

[Oh, And if you want to know how I got backticks to show up in the text without any errors, see T. Hovorka’s article How to Show R Inline Code Blocks in R Markdown.]

Graphically, the bar plot is the go-to representation for categorical variables. 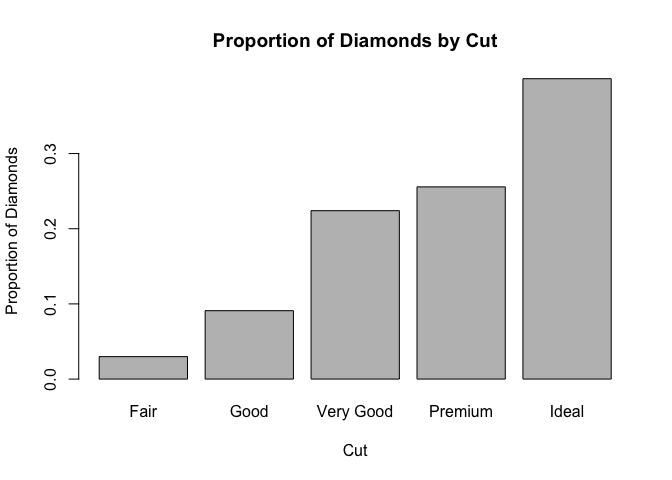 You can do the same thing using the ggplot2 package: 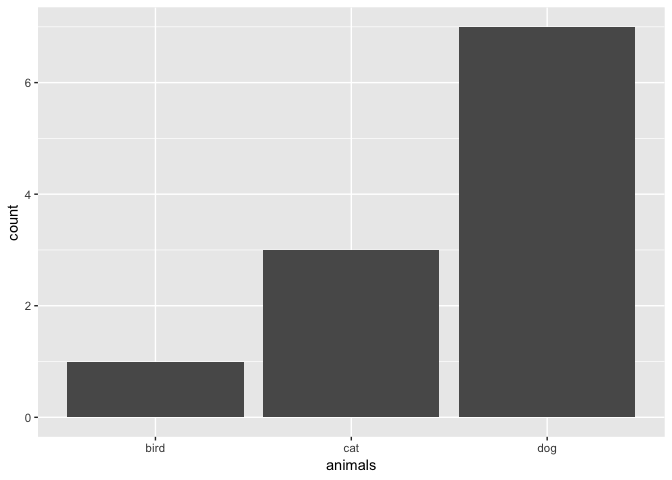 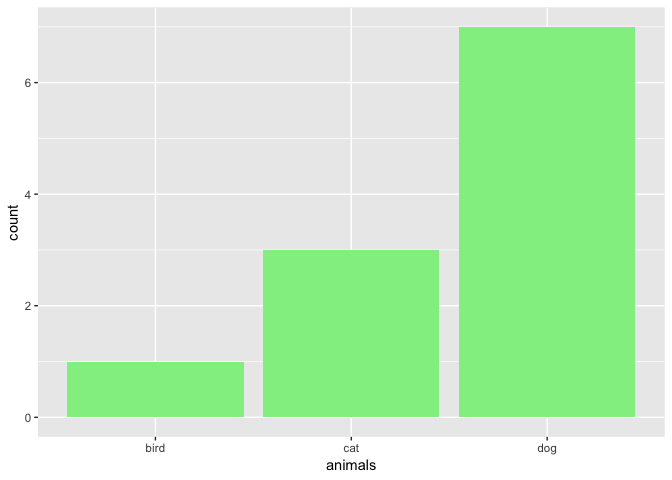 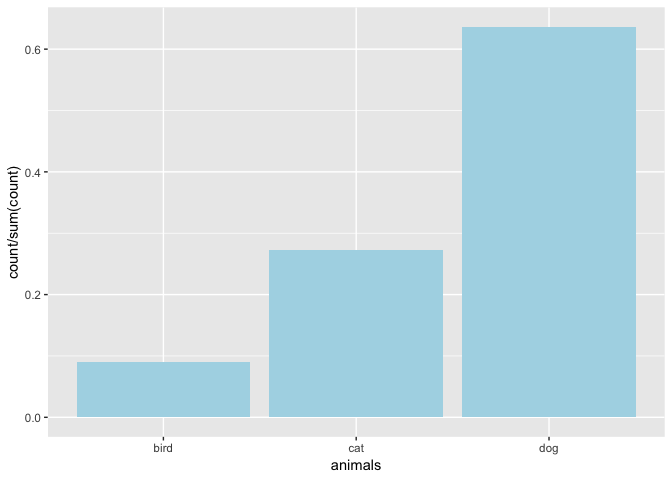 You can go on and on with ggplot2 adding more and more layers to the plot. You might start with a title in this example. See Joy Payton’s articles on ggplot2 here to find out how.