When we first learn linear regression we typically learn ordinary regression (or “ordinary least squares”), where we assert that our outcome variable must vary according to a linear combination of explanatory variables. We end up, in ordinary linear regression, with a straight line through our data. This line has a formula that’s very reminiscent of the line equations we learned in Algebra I as teenagers:

Where (sometimes ) is the y-intercept, and the other are the coefficients corresponding to each predictor variable. You may also see this formula with an “error term” added, which is the “noise” our model can’t account for. This is pretty similar to , right?

Let’s take simple linear regression first. What we’re trying to do is reduce the sum of squares of all our residuals (i.e. create a line that passes through our data points as closely as possible). At the end of the day, this is an optimization project that calls for calculus and uses the correlation coefficient . To find out more about the math that calculates the best line (“best” here means with the lowest sum of squared errors), check out the Khan Academy treatment of the subject. We’ll end up with a slope (, where s = sample standard deviation) and a point ), which, from Algebra I, we know we can put into the formula for a line (the point-slope formula). Usually, you won’t bother calculating all of this yourself, but it’s handy to recognize the relationship between some basic descriptive statistics and how your model is formed.

In R, it’s fairly simple to create a linear model using lm and formula notation, where we model an output ~ input, where we can interpret ~ as “as a function of” . Let’s take the mtcars dataset, which ships with base R, and do a bit of linear modeling:

You should get the following output:

We can see that summary() gives us a bit more detail than just the slope and intercept: it gives us the statistical significance of these values, as well as our R-squared value, which is a measure of how much of the behavior of the outcome variable is explained by our model. In our case, we have an R-squared value of 0.7528, or, if we’re adjusting for the number of variables used (a good idea, especially since we’ll start doing multiple regression), 0.7446. So we have between 74% and 75% of the variation in mpg (miles per gallon fuel economy) explained by just wt (weight in thousands of pounds). Not too bad! Additionally we see that both our intercept and the coefficient for wt are highly statistically significant. Let’s plot both the points and our model (a straight line with a y-intercept of 37.2851 and a slope of -5.3445): 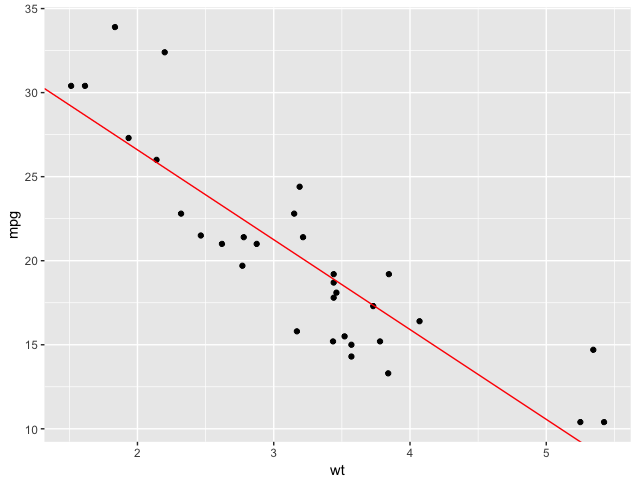 That’s a fairly good model. Visually, we see that it cuts through the points without any clear pattern of residuals (the points are scattered randomly above and below the line). Statistically, we see a good R-squared and convincing p-values. I’d feel comfortable saying this model does a good job of predicting MPG, given automotive weight.

Since mtcars has a lot of variables, let’s not stop at just one explanatory variable.

Let’s say we want to predict mpg as a function of both weight and transmission type. Since am is really a factor variable (0 = automatic, 1 = manual), we’ll put in as.factor(). This may seem like overkill, as lm will figure out that this is a factor on its own, but it’s always a helpful reminder both for R and for us that we’re dealing with a factor variable.

First of all, does it matter what order we put our explanatory variables? Let’s check, and try both orders. Note that we separate effects with a plus sign (+).

You should get the following output:

There’s no difference in the intercept, coefficients, or statistical metrics. Variable order does not matter in lm.

The three coefficients represent the y-intercept, a tiny amount to subtract if the transmission is a manual (am = 1), and the coefficient for the weight variable. Our formula would be something like:

*(Only if car is manual)

We’d have the same slope, but different y-intercepts (but barely!)

We could plot it like this. Note that the lines are very hard to distinguish as they almost coincide: 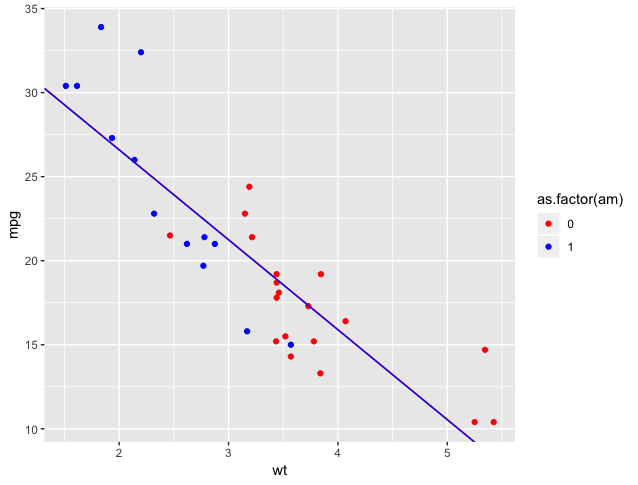 This aside is optional reading! The reason there's no difference in the lm output is because R is using Type III sum of squares in its calculations for lm, in which sequence does not matter. Compare, however, changing the order with base R's anova: You'll get the following output: Different p-values! Why? Because in anova, R is using Type I (sequential) sum of squares. This is important to keep in mind! If you want Type II or III sum of squares, consider using the car package and its Anovafunction (note the capitalization!): There is an adequate explanation of how effects are calculated in the various types of sum of squares here.

We can calculate this as mpg ~ weight + as.factor(am) + wt:as.factor(am), where we use a colon (:) to indicate interaction, or, much more simply, using a “cross”, indicated in our formula by *:

The model above gives us the following output:

The output from this summary is trickier to interpret (but promises to pay off, as we see a very good R-squared). We know that am has two values, 0 and 1, and we see that two of our coefficients list am of 1, so those two coefficients are for when am = 1. But how do I use these coefficients to calculate a prediction or draw a line?

So, we have two lines: 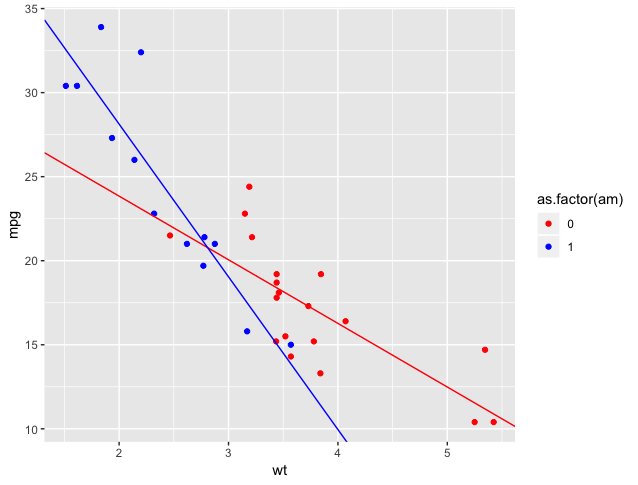 What happens if you specify a model with only an interaction term and no main effects, for example, mpg ~ wt:as.factor(am)? The answer is that it depends on the variables in your model.

If you have only categorical predictors, then most statistical software (including R) will just reparameterize the full model with main effects and interactions if you try to run an interaction-only model. That means the underlying math will be the same, and all of the model fit statistics etc. will be identical whether you include the main effects or not. What changes is the estimates of the regression coefficients, because the model will shift the reference group represented in the intercept. Nothing meaningful about the model changes, though.

If you have any continuous predictors, though, then omitting main effects when you put in an interaction will almost always result in a misspecified model. That means the model isn’t actually estimating what you mean it to estimate, and any model results are meaningless. In our case, if we ran mpg ~ wt:as.factor(am), it would force R to estimate only one intercept for both levels of am, which will pull the best fit lines away from the data they should describe. The reverse situation, where you have only main effects and no interaction is much easier to interpret — we estimate a different intercept for each am group, but we assume the effect of wt on mpg is the same regardless (i.e. only one slope), so we’re looking at parallel lines. That may or may not actually make theoretical sense (do you really think the effect of wt on mpg is independent of am?), but at least it’s interpretable. When we include both main effects and the interaction, we estimate a separate intercept and slope for each am group, which is again pretty interpretable.

But when we estimate only an interaction with no main effects, then we force both lines to go through the same intercept, and that means the slopes we get for each am group will also be very weird — once you force a regression line to go through a particular point, then the only way it can get closer to its data points (every regression line’s dearest wish) is by adjusting its slope, which means you might get more extreme slope estimates than are actually justified by the data. You can see that happening in the plot below, which shows regression lines from both a full model (including both main effects and the interaction) and from a model with the interaction alone, plotted separately for the two groups of am. As you can see in am=0, the interaction-only model estimates an intercept that’s too high for that group, and the resulting line has to slope down sharply in order to reach its data; the reverse happens in am=1. The estimated slopes for the effect of wt therefore describe neither the separate am groups (as they do in the full model), nor the data pooled across both am groups (as they do in the main effects model). 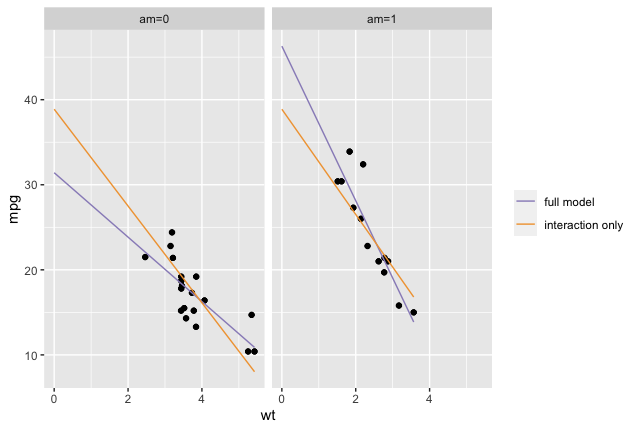 To sum up, while it is mathematically possible to estimate interaction-only models, it’s generally not a good idea.

So far, we’ve assumed you knew ahead of time what variables to use to construct your model. But sometimes you might have 50 variables available to you, with no clear hypothesis about which ones to use. You want to use enough information to get a close prediction, but not so much that the model is nearly impossible to use in the real world. In an upcoming article, we’ll talk about how to get a linear model in these conditions, by choosing the most predictive sets of variables.