A natural language is a language used by people to communicate with each other (like French or English). Researchers might be interested in studying various elements of language:

Natural language processing is a computational discipline that combines domain-level expertise (such as knowing linguistic terminology and methods) and computational foundations (like string manipulation). There are multiple ways to perform NLP, but in this article I am concentrating on the use of the Natural Language Toolkit (NLTK). Follow along as we analyze a text.

A fantastic resource for learning about NLTK is the free, very readable and approachable textbook available on NLTK’s website. This article is just to help you dip your toes into natural language processing, but the book will help you advance quickly in your competence in this area.

First, you’ll need to install NLTK using pip or conda (or your preferred installation method). NLTK has a lot of supplementary resources that are only downloaded as they are needed, so the first time you run a program using NLTK, you’ll probably be prompted to issue the command nltk.download(). Go ahead and just download everything – it will take awhile but then you’ll have what you need moving forward.

Once you’ve installed NLTK, we can get started using it. In the code below, I go through a natural progression of doing some experimental work to look at and visualize data, then optimize it for analysis. You’ll see errors and missteps along the way. The goal is to show you how to move forward in small, doable steps!

Below is where you might get prompted to do the full NLTK download. If so, do it! In the cell below, we’re loading up US Presidential inaugural addresses.

What inaugural files are within this corpus?

Just show the first 10. Note that I could also have typed inaugural.fileids()[1:10]

Get some overall stats about the corpus (body of texts) as a whole.

How many total words?

An aside here about methods and functions. If you’re anything like me, and you work in a number of languages, you’ll forget often whether something is a method or a function. Is it head(mydata) or mydata.head()? There’s not much to be done except practice, practice, practice. However, you can see the methods available on an object, which might help. Try, for example, dir(inaugural). See how at the end you can see the word words? That can be a good reminder if you can’t exactly remember what methods are available to you. What are the double underscores all about? Those are attributes.

OK, back to text analysis. How many unique words are in the corpus?

What are the most common words used?

We see that both the and The have appeared in our word list. We will want to be aware of case sensitivity moving forward!

Hone in on specific texts

Corpora are made of component texts. Let’s extract the first ten and last ten texts and compare the older to the newer texts. How has the language of inaugural addresses changed?

Here let’s do our first loop. In Python, whitespace indentation is important! It does the same thing as curly braces in other languages. We’ll also do a “list comprehension”, where we create a list by iterating over something.

So we know we can iterate through a list of filenames to analyze individual texts. But just printing the results isn’t very helpful for a scripted analysis! What can we do instead?

We’ll start by making a data frame (a table, essentially) that will hold various attributes about each text. Columns will include “filename”, “year”, “length”, “unique”, etc. That will make it easier to then treat these features like tabular data, so that we can do things like boxplots, t-tests, etc.

Let’s visualize speech length and number of unique words over our time frame. We’ll start with a simple bar plot of length: 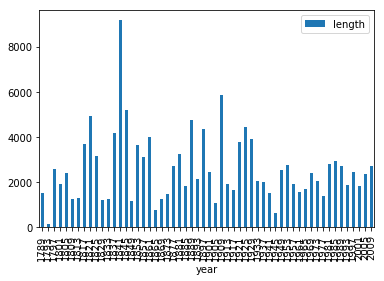 Let’s do both variables in a line plot:

Is there any difference in either the length of speeches or the number of unique words, between the first 10 and last 10 speeches? Let’s look at a boxplot.

Ugh, can we get rid of all that extra verbiage about matplotlib? We can by using plt.show() instead of relying on just the plot itself, which returns lots of info. This time, let’s look at unique words: 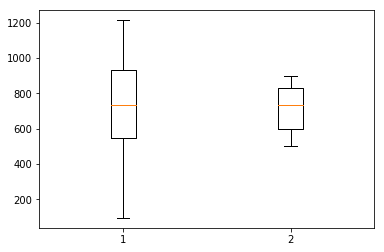 Is there a statistical difference, say, in length, between my two timeframes, early and late? We’ll do a two-sample independent T test:

Unsurprisingly, there is no statistical support to propose that the mean speech length is any different between early and recent inaugural addresses. We can eyeball the same thing in the boxplot for number of unique words. But we do think there are some differences between older and more recent speeches. Maybe the kinds of topics or words? The percentage of all words that are verbs or adjectives? Let’s take a closer look.

A closer look at word frequency

We already took a quick peek at word frequency and we came up with a list that included a lot of obvious words like “the” and “and”. So, how can we get a list of words that actually matter?

We want to get top word frequencies for words that aren’t included in the a list of highly used, unhelpful English words (aka “stopwords”).

Let’s look at the 15 most frequently used non-stopwords for each inaugural from the early group:

Hmmm, we still have punctuation in there, which we don’t care about. Let’s remove those, and try again. Note that I’ve added a few random weird punctuation marks that I know will appear later unless I take action now.

Better, but again, we want to make the output something that can be the object of computation. Let’s do the following:

We now have a list of frequent words, but I want to eliminate duplicates (using set()) and alphabetize the list (using sort()).

Looks good. Let’s take these words and look at their frequency over time. We’ll transform counts to percent of total words, so as to make an apples-to-apples comparison between speeches of different lengths.

If I were to look at my data frame now, it would be out of order! Let’s fix that:

We know we have over 100 frequent words! What if we dared to do a line plot? Should we? 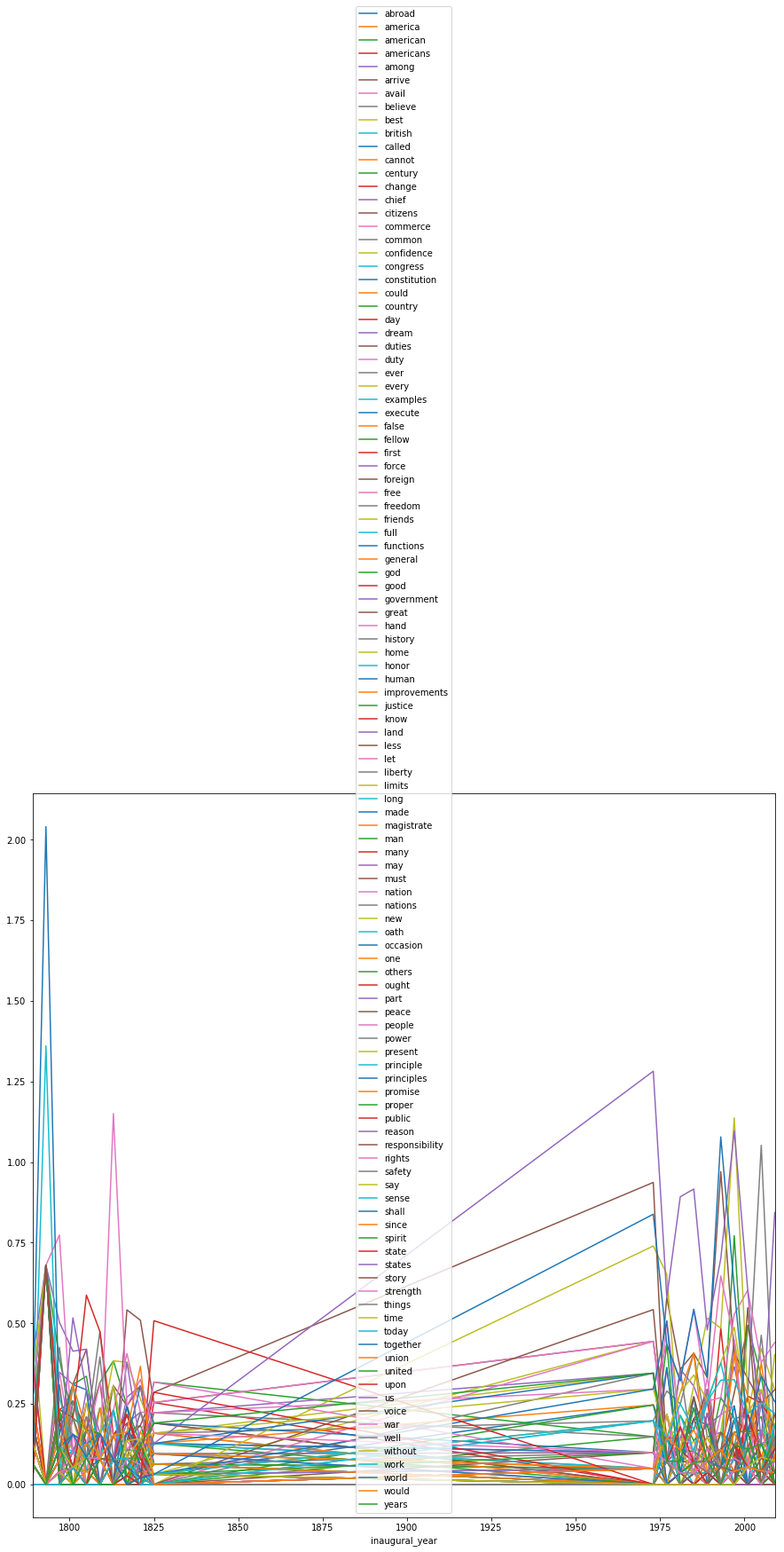 Ugh, no. Keep in mind a couple of things here:

So we’ll get early averages and late averages, subtract them, and see where the biggest differences lie.

Take the absolute value of the differences, which will give us a one-row data frame. Transpose that (so it becomes one column) and “squeeze” it into a series (a vector of values). The sort it from highest to lowest.

The first two values, inaugural_year and total_length, don’t really matter – means on those values don’t matter for us. But we see fairly large differences in the use of “us” (probably confounded with “US”?), new, world, must, shall, may, freedom, public, work, and time.

Let’s take a look at the difference in the use of the word “freedom”: 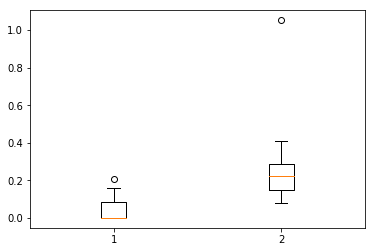 Wow, there’s much higher use of the word “freedom” in later texts. Is the difference significant?

Yep, it looks like the difference in the word “freedom” is statistically significant in these speeches. This could indicate a number of things, like the frequency of the word in general spoken English (perhaps “liberty” or another word was preferred in the early years of the United States?), political changes, or thematic differences in the speeches.

In subsequent NLP-related posts, we’ll talk about how to do part-of-speech tagging and other metrics that can help analyze texts. Stay tuned!