Comparing Parts of Speech with NLTK

In an earlier post, I showed you how to work with NLTK (the Natural Language Toolkit) in Python, using the texts that are optionally included with NLTK. There, we just sort of poked around trying various things. In this post, I will explain an actual statistical investigation of differences in the use of parts of speech using the same tools.

In this post, we’re going to reproduce just the language analysis bit I used, not the web scraping. We’ll do the language analysis of parts of speech in State of the Union (SOTU) addresses. My (completely made up) hypothesis is that republicans and democrats differ in their use of comparative and superlative adjectives and adverbs (“best”, “most”, “angrier”, “grander”). I propose that one party has more extreme ways of describing the state of the nation in their State of the Union addresses.

We’ll start with the obvious:

Then we’ll import some texts to work with. If you haven’t already (or, if it’s been awhile), do the following, and (in a new window), choose to download “all”. It might take a while, but it’s worth it to have a lot of texts and tools to play with:

Once that is accomplished (close the pop-up window), we can access some texts:

Let’s take a peek at what’s inside!

Well, our dataset is limited, but it’s good enough for us to get started!

We can peer inside one more carefully (here, I’m only showing a bit of the output):

First, we’ll create a function that will take a single text, and analyze it for parts of speech. First we’ll import a couple of needed modules:

And then we’ll create a function that turns the text to lower case, breaks it into words (tokenizing it), then assigns a part of speech for each token and returns the count for each part of speech in a dictionary:

Let’s try the function to see if we get the kind of output we expect:

The output is a bit confusing. We can go to the Penn Treebank homepage to find out what these labels mean. Or, we could do the following, which shows examples (output truncated for this post):

Great, but how can we do this for every text, combining where needed (e.g. combining all of a single president’s SOTU addresses into one measurement) and comparing where appropriate (Republican vs Democrat, 1960s vs 1980s)? One approach is to build a table of counts such that we have all the counts for all the texts, and then we can remix as needed for our study.

Note that when we get into analysis like this, there are usually several ways to proceed – so if you would approach the problem differently, that’s okay!

We’re going to create a function that sets a few things up, then iterates over every file in the state of the union corpus and collects three sets of data:

We’ll then combine these three sets into one single data frame, which we return as the result.

First, we need to load a couple of libraries:

And now we’ll create the function that does all the good stuff!

Take a peek at what we’ve built:

Keep in mind that the numbers in the part of speech columns are just counts! We’ll have to figure out percentages, since we want to compare the relative frequency of parts of speech.

We also have too many parts of speech to work with. We really want to work with just a handful.

So, we have to slim down and consolidate our large data frame. We can do this by indexing and by using the pandas groupby function.

We’ll do this in steps. First, we’ll get all rows and just the columns starting with president_name forward.

Let’s take a peek so far:

And we’ll limit to just comparative and superlative adjectives and adverbs. But we’ll also hang on to ‘Total’, because that allows us to determine the percentage of speech that each part of speech takes up.

We’ll separate out republicans from democrats:

Now we have some nice, compact data frames! We still have to figure out percentages, however. We’ll divide everything by the ‘Total’ column:

Do Republicans and Democrats differ in the way they use comparative and superlative adjectives and adverbs in their State of the Union addresses? Let’s take each type of part of speech separately and compare them, then sum all four parts of speech and make an overall comparison as well. We’ll visualize differences using a box plot, and also conduct a two-sample T test.

We’ll need some additional python libraries, and need to set up some plot parameters to display our visualizations in our Jupyter Notebook:

And now we’ll plot the comparative adjective use of both groups. 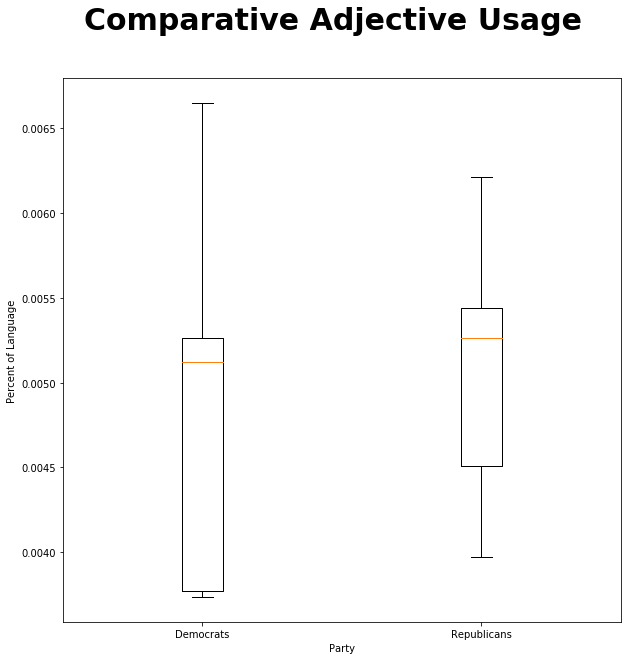 It doesn’t look very promising – these distributions overlap rather a lot! Let’s do a T test to see if the difference is likely due to random variation:

That’s a very high p value. 78.8% probability that the differences we see are due to random chance, not a true group difference.

Let’s move on to superlative adjectives! 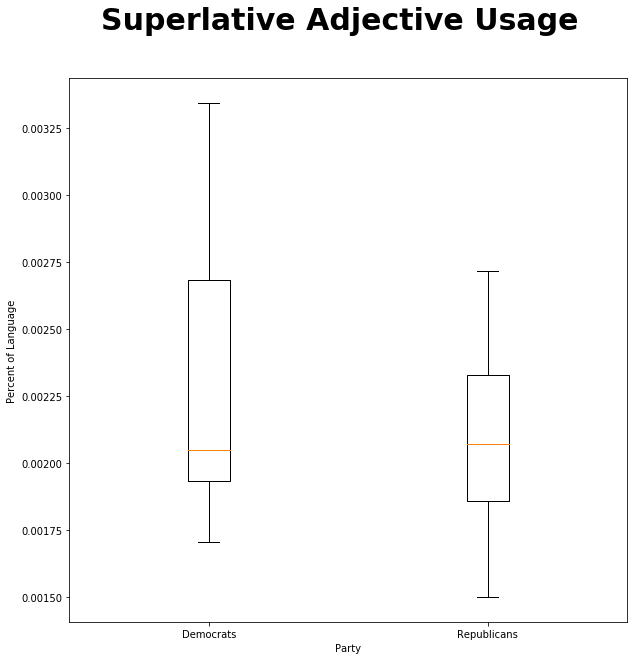 Once again, both visually and statistically, there’s no significant difference. Let’s do the same for both comparative and superlative adjectives!

Well, none of the individual parts of speech were notably different, but what if we sum them?

Nope, no finding here. It looks like we can reject my hypothesis that presidential speakers of different parties express different concentrations of comparative and superlative adjectives and adverbs!

How could this investigation have been done better? Well, we’d ideally like more text from more presidents – maybe get all of the SOTU addresses instead of a small chunk of years, or add in other texts. We also want to be careful to remove annotations like “(Applause)” and photo credits, which aren’t really part of the presidential address. We didn’t do that here. There are lots of ways to remix this. Let me know what you come up with and if you use this technique in your research!