The National Institutes of Mental Health continue to develop a framework for organizing research efforts related to mental illness: Research Domain Criteria, or RDoC. Rather than classifying symptoms into disorders as in the DSM system, any aspect of human experience can be measured, multidimensionally, by scoring it within a carefully designed system of domains, constructs within domains, and sub-constructs on the one hand and units of analysis on the other. These factors are examined “in a context emphasizing developmental trajectories and the individual’s interactions with his or her environment.” The following elements, therefore, make up the criteria:

The following video was presented to the world in December of 2014. It’s useful to watch (get coffee), but bear in mind that things have changed since then. Read on after the video to learn more.

According to the extremely useful website about RDoC at NIMH, “The RDoC matrix has become a framework for organizing our research efforts, as it frees scientists from traditional categories that have proven to be heterogeneous.”

The rest of this section about RDoC is an introduction that provides only the barest scaffolding for your research efforts. Please make use of the links within to learn more.

I have included here basic information about RDoC domains in their simplest forms. Click on any of the links to learn (much) more about each domain.

II. Positive valence systems provide responces to enticements such as food or praise.

All well and good so far, but exactly how are each of these domains, constructs, and sub-constructs represented numerically for data analysis? What are the units of measure within RDoC? They are units of analysis, which are (currently) these:

One unit of analysis has been dropped by the NIMH: genes. This is a rather dramatic change, so I’ll use their words to explain the decision:

We recognize the clear relevance of investigating genomic aspects of RDoC constructs and domains. However, the current state of the field emphasizes the need for robust evidence of association, generally resulting from adequately powered genome wide association studies, as opposed to candidate gene approaches. As we actively re-evaluate the specifics of information to be included in this column, the RDoC matrix will be updated accordingly.
If you are a researcher who is interested in incorporating genetic analyses in your RDoC study, please contact your NIMH Program Officer for further information.

I can’t do better than to quote the NIMH’s basic definitions of these elements of RDoc. Learn more here: 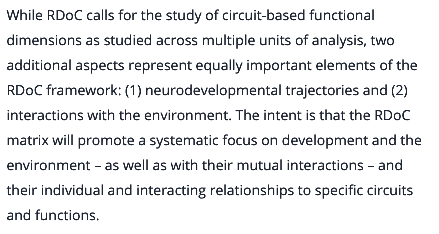 Putting it all Together to Reference a Matrix

Combining the domain, constructs, and subconstructs with the units of analysis provides a matrix that synthesizes all the elements.

In text format, you might see something like the following if you looked at the intersection of fear with the various units of analysis: 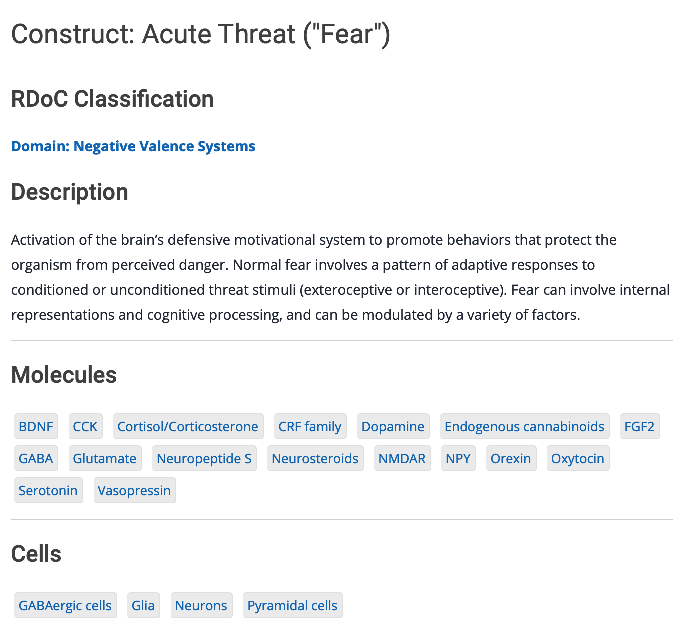 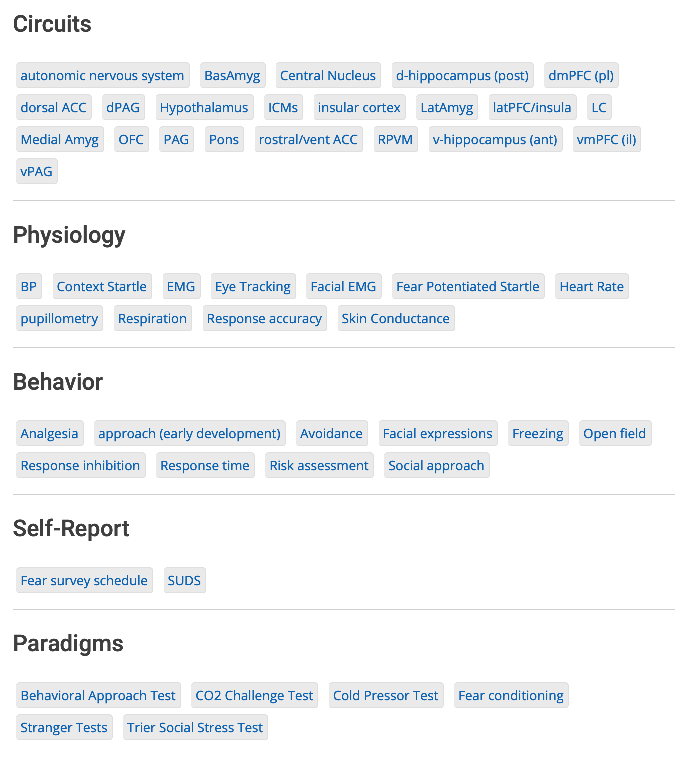 It’s up to you, the researcher, to fit this information within development and environment.

To find out more about RDoC generally, see the NIMH website. There you will find a very thorough description of the domains, a link to the RDoC twitter feed (well worth monitoring or participating in if you plan to do research using RDoC, as the system is still being updated), a link to the RDoC Matrix, a history of how RDoC was developed, a FAQ, funding opportunities, NIMH RDoC publications, education and training resources, a list of RDoC unit and work group members, RDoC webinars, and even an RDoC database containing data enrolled by other researchers.

Again, all well and good. But how does all that relate to natural language processing? How do you take massive numbers of text notes in natural speech and relate them to RDoC? It’s one thing to be carefully testing a patient and placing them within an RDoC matrix and quite another to query an entire database of text notes to harvest specific domain information about them. Accomplishing that task is far from simple, and very few people have even attempted it. 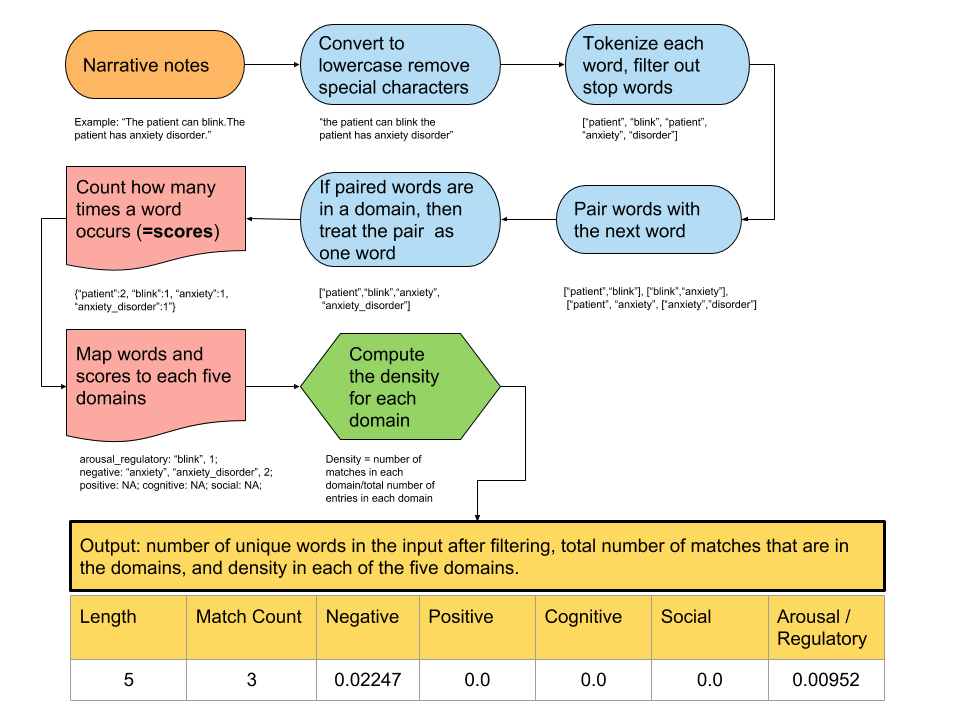 Once a given note drops through the algorithm, it has acquired a value for each domain that was calculated by dividing the number of occurrences of any found term by the number of terms belonging to that domain.

McCoy and his colleagues have been using their algorithm in subsequent research. Another 2018 publication, Genome-wide association study of dimensional psychopathology using electronic health records is an attempt to show that their natural language processing algorithm has a useful application. So is their more recently released work Research domain criteria scores estimated through natural language processing are associated with risk for suicide and accidental death, which is about a small but real indication of the usefulness of evaluating text in electronic health records in the context of the NIMH’s research domain criteria (RDoC) matrix.

McCoy et al.’s algorithm will be made available to you through the Arcus Annotations tool. The Arcus team decided to use this particular tool for the following reasons:

Granted, McCoy’s method does not reach the level of granularity that is possible in RDoC. We are at the beginning of a long story about how notes can be utilized at CHOP for research purposes. Perhaps the next chapter, which could be developing a method that makes use of greater RDoC granularity—is your next project.